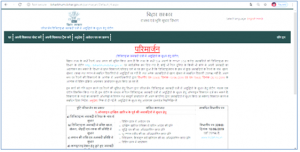 Under the ambit of implementation of Digital Land-Records Modernization Programme (DILRMP), Digitization of Jamabandi data is the first step for extending ICT based services to citizen of the state from the arena of revenue, and it is important to regularly improve the quality of consolidated Jamabandi data and services based on it.   ‘Parimarjan’ is a G2C initiative launched by the department for extending online services to its citizen for accepting citizen’s online request for permissible correction in Jamabandi data content as per legal procedure.

The ‘Parimarjan’ application being bilingual i.e. both in Hindi and English, and keep the citizen acquainted through SMS and email about the status of their requests registered on the portal.

Circle Officer being the legal custodian of the Jamabandi data, he/she has been made liable in the workflow for processing of citizen’s requests registered on the portal and their timely disposal. This is an important service for the Jamabandi owners of the state as Jamabandi being the baseline for all revenue related services; its content must be integral and updated.

The Jamabandi content which is used for online mutation and lagan collection possess anomaly, and which slows down the citizen centric online services. To overcome the issues, "Parimarjan" application software has been developed by NIC Bihar Team under the leadership of Sh. Rajesh Kumar Singh, SIO Bihar. The project was developed under the guidance of Sh. Somesh, Scientist-F and Project coordinator Sh. Sanjay Kumar, Scientist-E.

This application helps the citizen to file complaint for correction in online Jamabandi data freely available for citizen on biharbhumi.bihar.gov.in. This application offers six different types of services to citizen for modification in Jamabandi content. The citizen has to select any of the services and upload required document in pdf format. The required list of document for different services is shown on the site for convenience of the citizen. All the services have a fixed timeline for its processing defined by department.

educratsweb provide the educational contents, Job, Online Practice set for students.
if you have any information regarding Job, Study Material or any other information related to career. you can Post your article on our website. Click here to Register & Share your contents.
For Advertisment email us at educratsweb@gmail.com
Search | http://educratsweb.com/content.php?id=2267