Amidst the outbreak of novel coronavirus (COVID-19) crisis in the country, the Government of India had announced various economic measures under the AtmaNirbhar Bharat Package (ANBP) in the middle of May 2020 for migrant workers across the country. Pursuant to this, the Department of Food & Public Distribution had allocated a total quantity of about 8 Lakh MT of foodgrains to all States/UTs which was communicated to all States/ UTs on 15th May 2020 under the “AtmaNirbhar Bharat Scheme (ANBS)” to help mitigate the food-security requirements of migrant/stranded migrants across the country. This scheme specially provided to cover all such persons who wereneither covered under the National Food Security Act (NFSA) nor under any other State PDS scheme or were not able to access PDS foodgrains for any reason, during the unprecedented COVID-19 situation.

The number of inter-state migrants was not documented anywhere but as a matter of abundant precaution and taking into account the extensive media coverage, a very liberal estimate of   about 8 Crore migrants/stranded migrant persons across the country was made. The intention was to provide adequately for all eventualities so that the allocation did not fall short of the requirement. It needs to be emphasized thatno data on actual or estimated number of such persons across the country was available with either the Central Government or the State Governments. In fact, the scale of the problem, as got highlighted in the media, was such that it required a compassionate and generous response from the Government so that no one was left out.

Accordingly, the Department of Food & Public Distribution had liberally allocated a quantum of foodgrains to cover maximum migrants/stranded migrants in the country. In order to ensure that there was uniform availability of foodgrains, each state was allocated additionalfoodgrains aggregating to 10% of the nearly 81CroreNFSA population in the country. Thus, Food Department allocated about 4 LMT food-grain per month and a total of 8 LMT for a period of two months i.e. May and June 2020.This was sufficient to cover about 8 crore migrant/ stranded migrants,if at all that was the number in reality.Further, States/UTs were given complete freedom to identify and distribute this additional ration to anyone who did not possess any ration card or was not able to access foodgrains due to crisis, and were requested to develop suitable mechanisms for the identification of persons and subsequent distribution of free foodgrains to them. Further, this Department of Food & Public Distribution regularly interacted with States/UTs and also proactively clarified to all States/UTs that besides migrants/stranded migrants, the distribution of free food-grains under AtmaNirbhar Bharat Scheme(ANBS) can also be done to all such persons, who do not have NFSA/State ration cardor its details.

During implementation of AtmaNirbhar Bharat Scheme (ANBS), the Food & Civil Supplies Departments in all States/UTs made rigorous efforts to identify maximum number of  migrants/stranded migrants in their States/UTs such as persons in transit, quarantine centers,labour camps, construction sites, etc. and also took support from their counterpartsin Labour Departments, district administrations, civil society, NGOs, etc. and thus based on the identification/ surveys the States/UTs combined had indicated an estimated figure of about 2.8 Crore migrants/stranded migrants whocould be potentially benefitted from the distribution of free foodgrains under the ANB Scheme and mobilized all resources on a war-footing to distribute the freefoodgrains to all such persons, not only through the Fair Price Shops (FPSs) but also through special distribution centers across major roads & highways, quarantine centers, shelter homes, labour camps, etc. and through use of mobile vans to reach out to maximum number such persons wherever they were.

The AtmaNirbhar Bharat Scheme (ANBS) was announced in the middle of May 2020,and after  the identification of such migrants/stranded migrants by States and UTs, a total of about 6.38 LMT foodgrains was lifted by States/UTs based on their own initial estimates which was also liberal and driven by their sense of abundant pre-caution so that no migrant/stranded migrant got left out.While this exercise was going on, many States/UTs later informed that a majority of such migrant persons had already left their States/UTs and had moved back to their home States/UTs, where they may be having access to either NFSA or State PDS foodgrains. Thus, the lifted quantity of 6.38 LMT of foodgrainscould not be completely utilised/distributed.  As a result, States/UTshad distributed only about 2.3 LMT foodgrains by end of June,2020. However as per requests received from many States/UTs, the distribution period of the already lifted foodgrains was extended by another two months i.e. up to 31st August 2020, in order to providethe States/UTs adequate opportunity to cover maximum number of migrants/stranded migrants.

As per reports available up to 17th August 2020, out of total 6.38 LMT lifted foodgrains, a total of about ­­­2.49 LMT (39%) foodgrains have been distributed by the States/UTs under the scheme to identified migrants/stranded migrants.With the distributiongoing on until 31st August 2020, it is expected that some more migrant persons may benefit from free foodgrains under ANBS by then. The low utilization clearly confirms that the actual number of migrant workers was actually much less and if they had returned to their home states then they were already covered either under NFSA or State Ration Card scheme.

Further, it is also relevant to mention that besides distribution of free food-grains under ANBS, some of the States like Uttar Pradesh,Bihar, Tripura, Manipur, J&K have also issued new ration cards after March, 2020 to beneficiaries, not covered earlier,adding nearly 45 Lakh, 15 Lakh, 25,000, 10,000, and 35,000 persons respectively to regularly receive subsidised quota foodgrains under the NFSA/PMGKAY. This means about 1.30 crore additional persons got covered during this period who were not covered earlier as they were outside the state and on return got new cards made. And this number could easily be added to the 2.51 crore migrants who got coverage under ANBP, raising the number of actual beneficiaries to 3.81 crore on a monthly basis. Besides, many States/UTs have drawn subsidised foodgrains from the Open Market Sales Scheme (OMSS) and have provided the same to various civil societies, NGOs, district administrations to deliver either food-kits/ cooked meals/ etc. to many more migrants who needed food assistance during the time of utmost crisis. States have also used SDRF resources in the initial period to cater to food requirement of migrants/stranded migrants.

NFSA covers nearly 81 Crore persons and Some States/UTs’own scheme including tide over foodgrains coveringadditional20 Crore persons. Thus, after covering more than100 Crore persons under PDS through NFSA and State/UTs’ own scheme, the provision for additional8 Crorepersons was deliberately on the liberal side and the moderate utilization clearly shows  thatthe actual number of inter-state migrants was much less than anticipated earlier.This also shows that provision was more than sufficient and did not fall short of requirement of migrants/stranded migrants. The interpretation that 8 Crore migrant actually existed, and should have been served is thus not a correct interpretation of facts.Also, it should be a matter of further satisfaction that this number turned out to be much less at 2.33Crore in May and another 2.37 Crore in June, falling in the range of assessment made by the State/UTs by the end of May,2020 reflecting aindicative figure of 2.80 crore. In addition, 1.30 Crore additional persons were covered after March, 2020 who after returning to states are getting regular ration under NFSA/PMGKAY and therefore, the number of 8 Crore persons should not to be construed as the real target and underperformance of ANBP. The fact that even after the extension of the distribution time of the already lifted quantity of food-grains by the States/UTsto July and August, 2020, only over 21 lakh beneficiaries could be covered in July by all states and about 6 lakh beneficiaries in August, is an indication that all  migrants/stranded migrants have been covered and the ANB scheme has served the purpose for which  it was brought out.It should, therefore, be seen as success of this timely intervention rather otherwise. 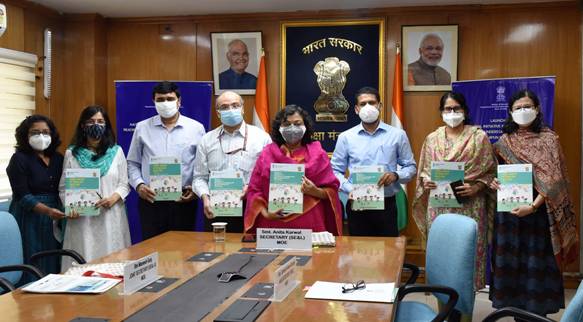