In a major step towards creating sustainable self-employment, Khadi and Village Industries Commission (KVIC) today distributed electric potter wheels (chaak) to 150 potter families in East Champaran district in Bihar. Member of Parliament and former Union Agriculture Minister, Shri Radha Mohan Singh distributed electric chaak and other equipment like blunger machines and pug mills to the potters in presence of KVIC Chairman Shri Vinai Kumar Saxena. The beneficiaries who were given electric chaak after comprehensive 10-day training also include migrant workers who have returned to their home town facing financial distress in the Covid-19 Lockdown. This initiative will benefit nearly 600 persons of the Kumhar community in East Champaran district.

The pottery equipment have been distributed under Kumhar Sashaktikaran Yojana of the KVIC which aims at strengthening the marginalized potters’ community and increasing their income by enhancing their productivity. KVIC has set a target of distributing 500 electric chaak in Bihar in order to empower the potters’ community and create local livelihood opportunities.

Speaking on the occasion, Shri Radha Mohan Singh thanked the Prime Minister for initiating such schemes through KVIC to benefit the poor. He lauded KVIC for undertaking the employment generation programs in Bihar. He said KVIC’s schemes like Honey Mission and Kumhar Sashaktikaran Yojana had the potential of creating large-scale employment in the state which has a vast rural population. “With such employment generating schemes of the Central government, the youth of Bihar will no longer have to migrate to other states in search of jobs,” Shri Singh said.

KVIC Chairman said there is a great employment potential for potters in Bihar. “By providing them with pottery training, the KVIC is creating employment at doorsteps for these people. While this will help us revive the art of pottery, it will also increase the income of the potter's community by 4-5 times,” Saxena said. He further said the KVIC will also roll out new initiatives like empowerment of leather artisans (Mochi) and Project DigniTEA in Bihar for creating sustainable employment soon. Under Project DiniTEA, KVIC distributes cycle-mounted tea/coffee selling units to unemployed youth where the beneficiaries can sell tea/coffee in a hygienic condition and earn respectable livelihood.

Under Kumhar Sashaktikaran Yojana, KVIC has distributed more than 17,000 electric chaak to potters’ community across the country and thus benefitting over 70,000 people through this scheme. 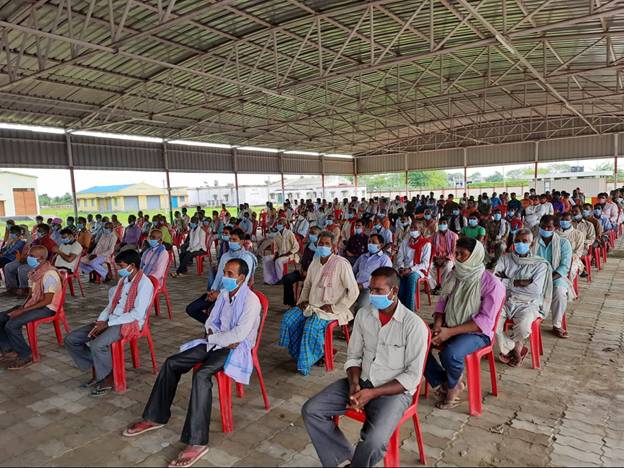