In the 4th edition of Pariksha Pe Charcha, the Prime Minister, Shri Narendra Modi interacted with students, teachers and parents in virtual mode today. The interaction, which lasted more than ninety minutes, saw students, teachers and parents seeking guidance on various issues of importance to them from the Prime Minister. This year too, students from across the country, and also Indian students residing abroad, participated in the event. 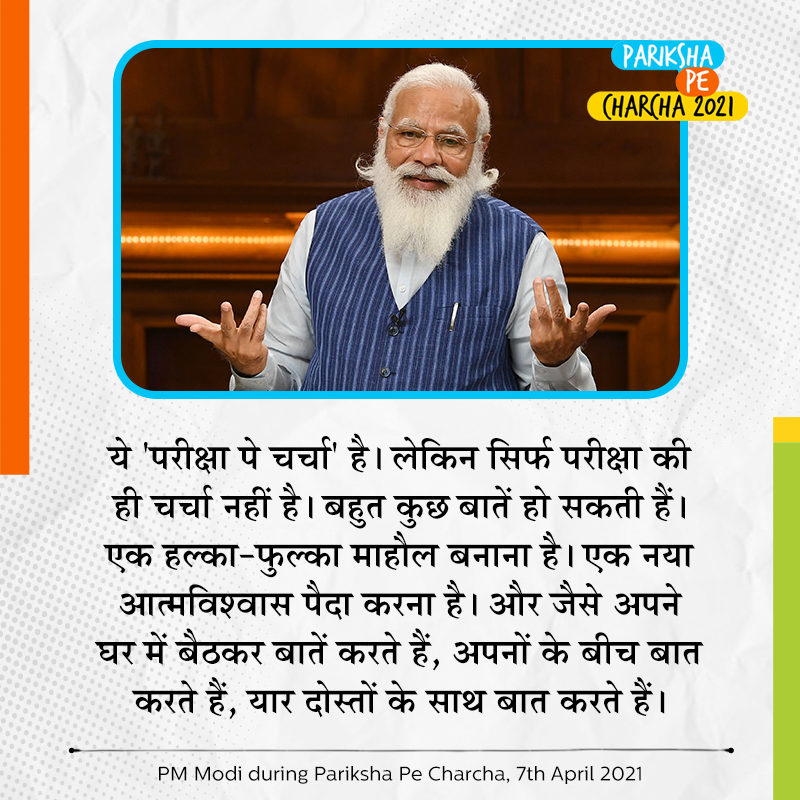 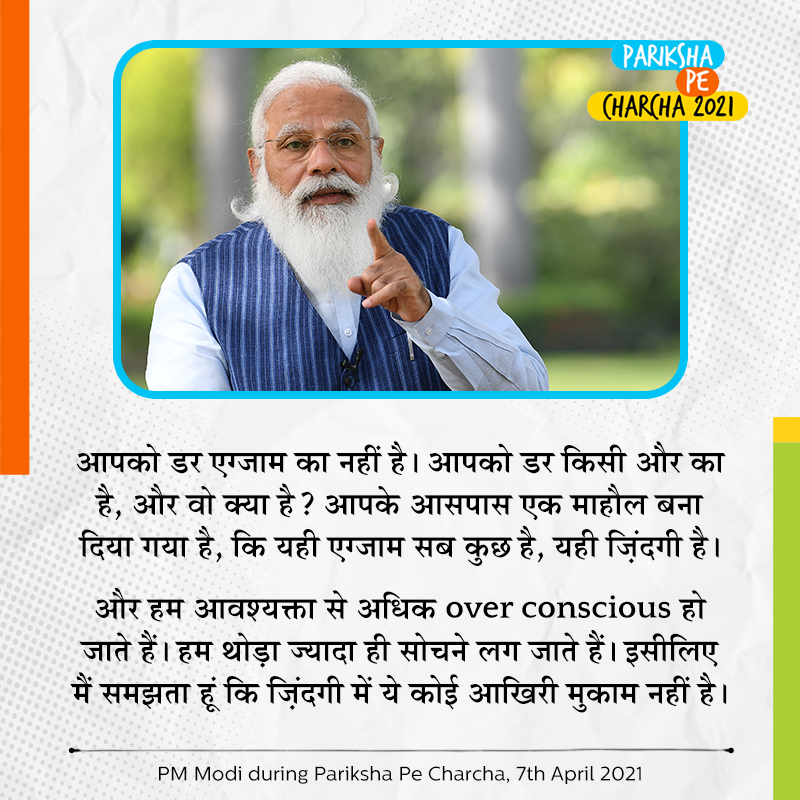 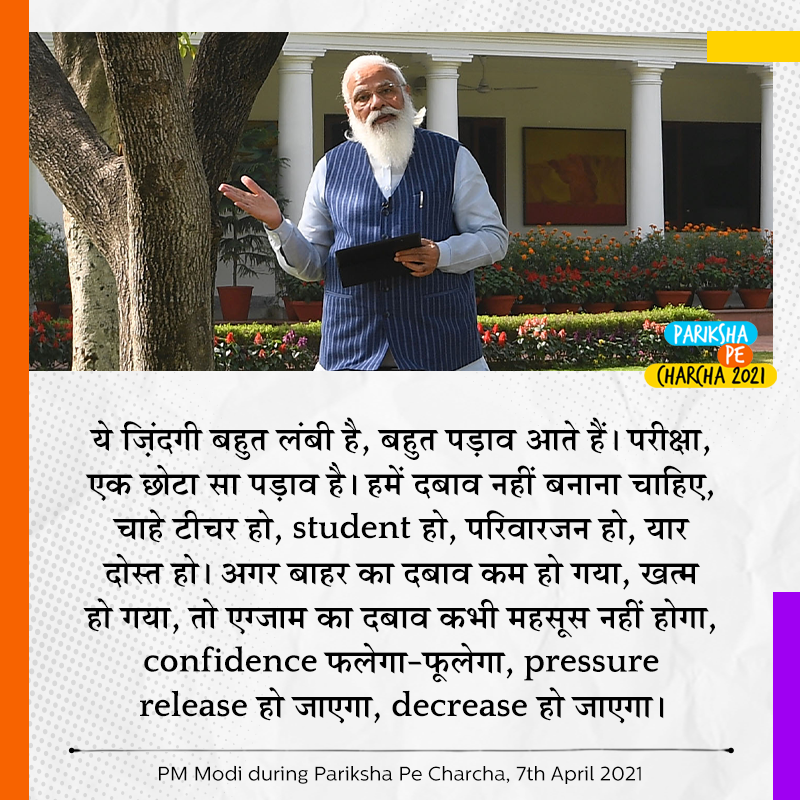 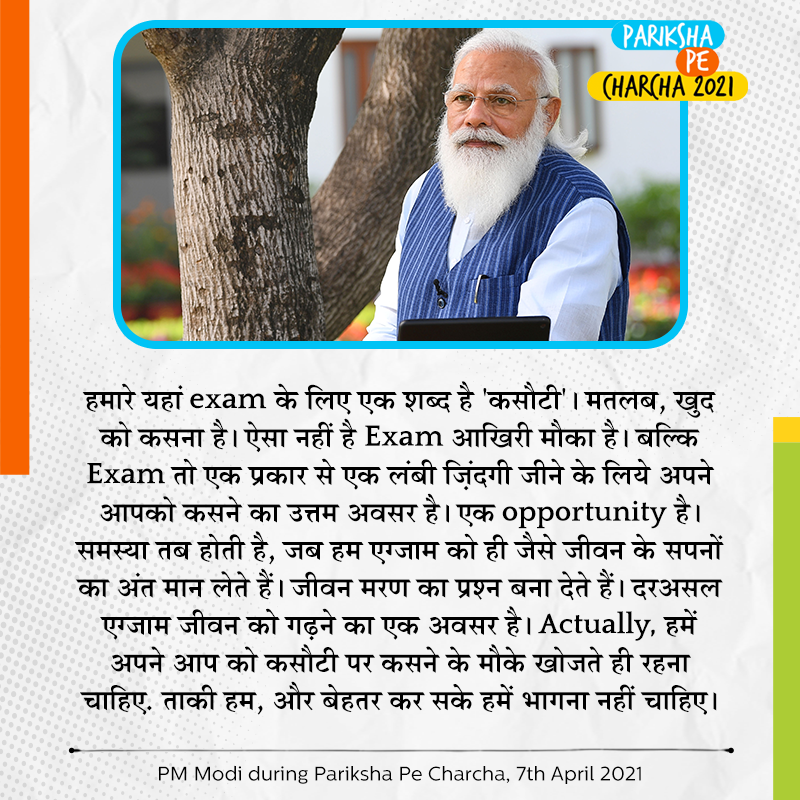 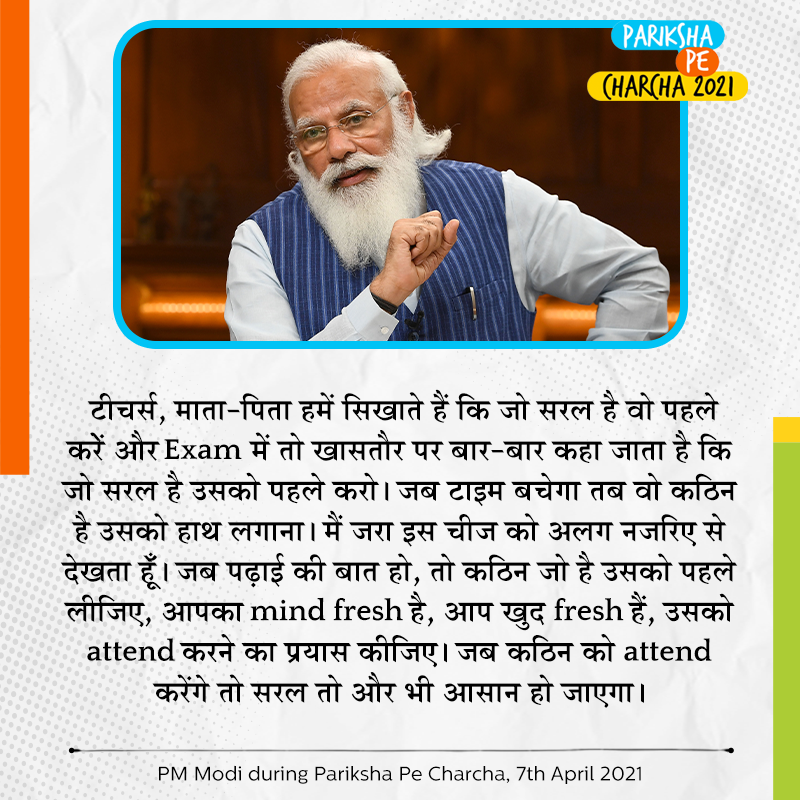 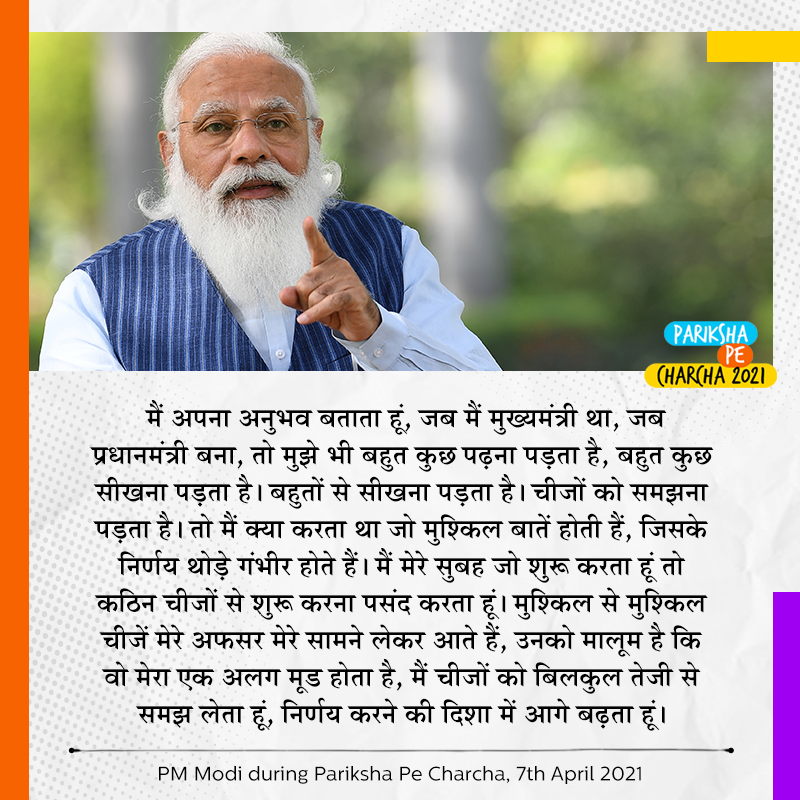 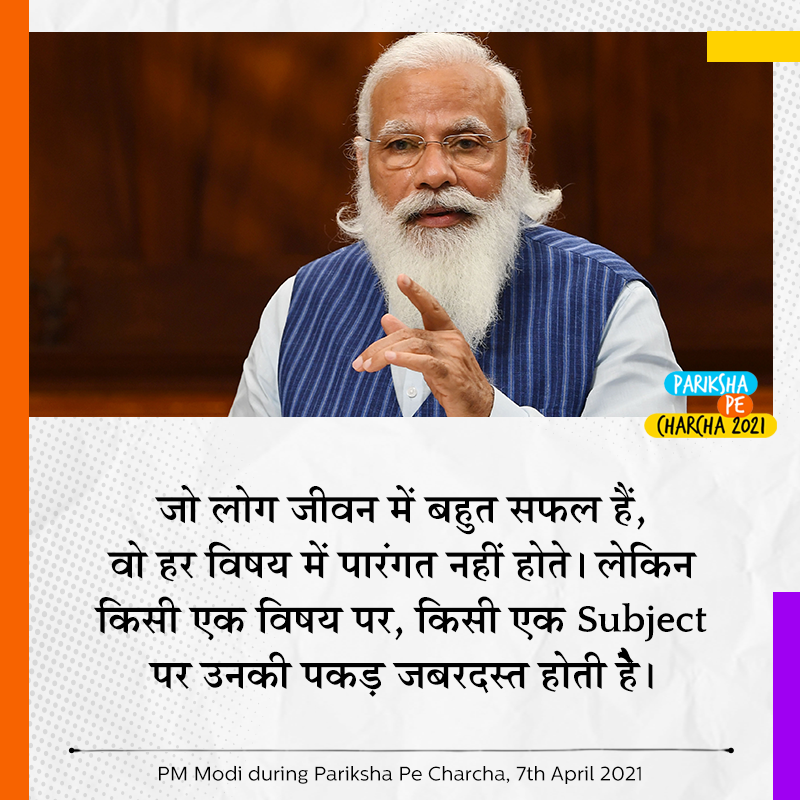 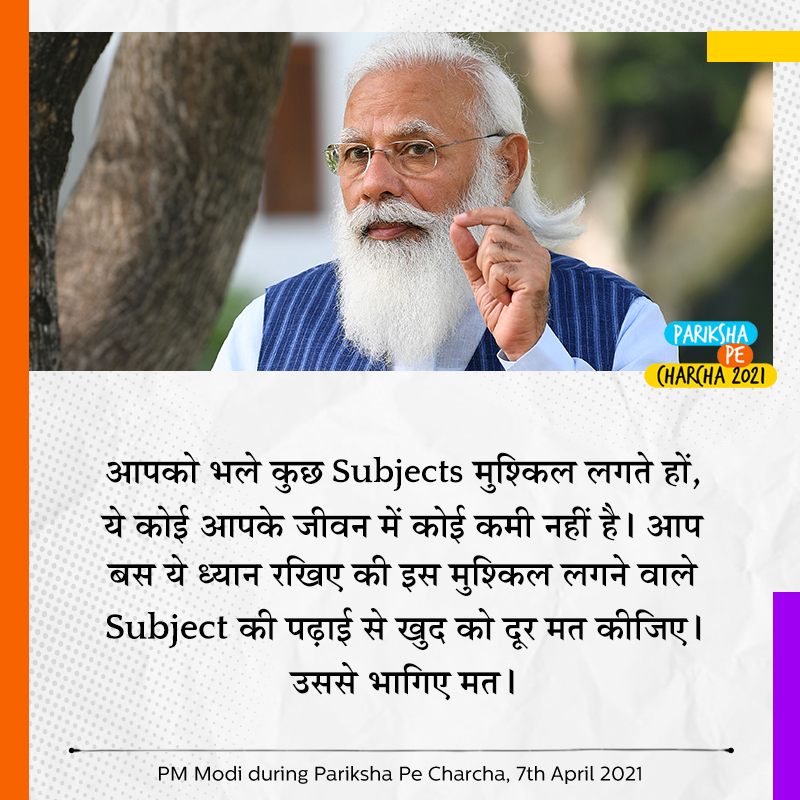 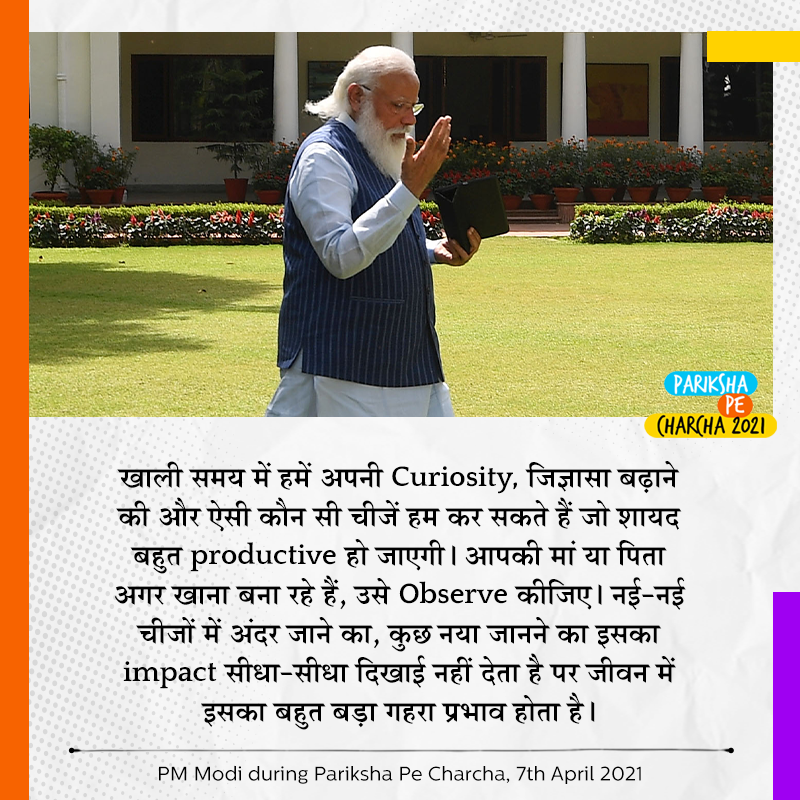 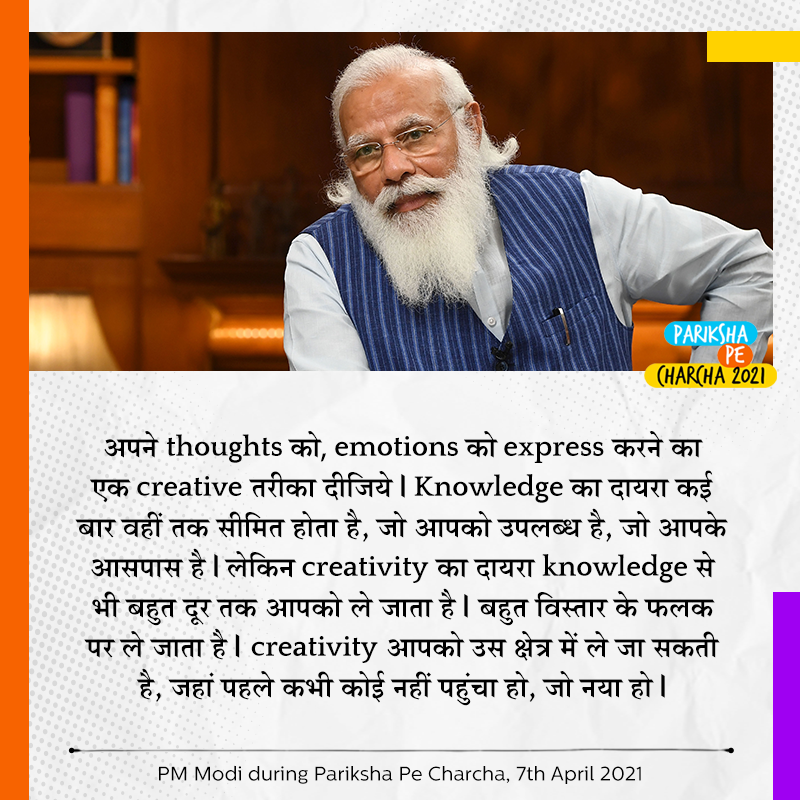 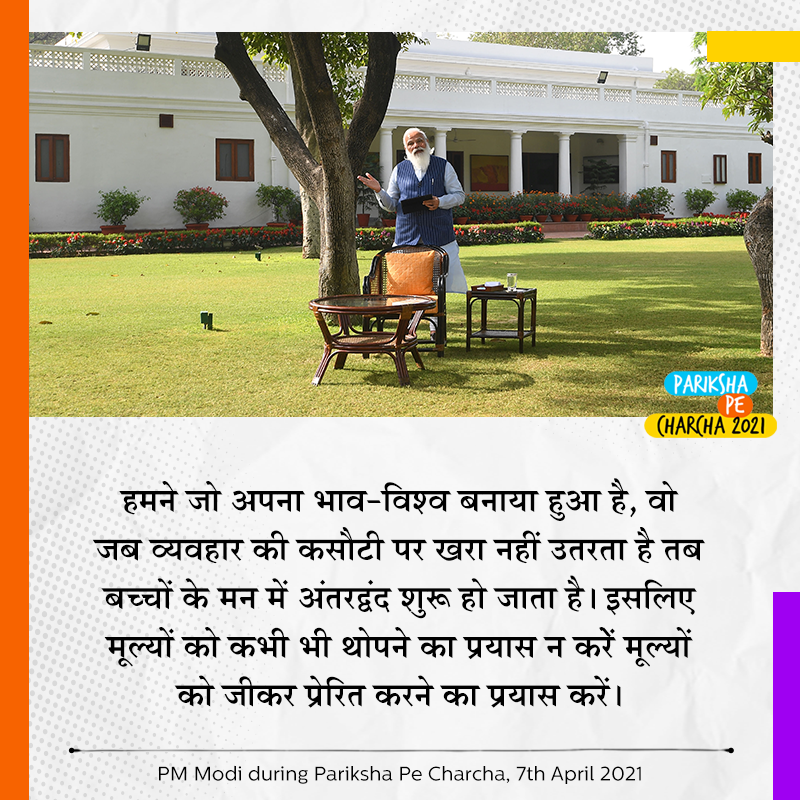 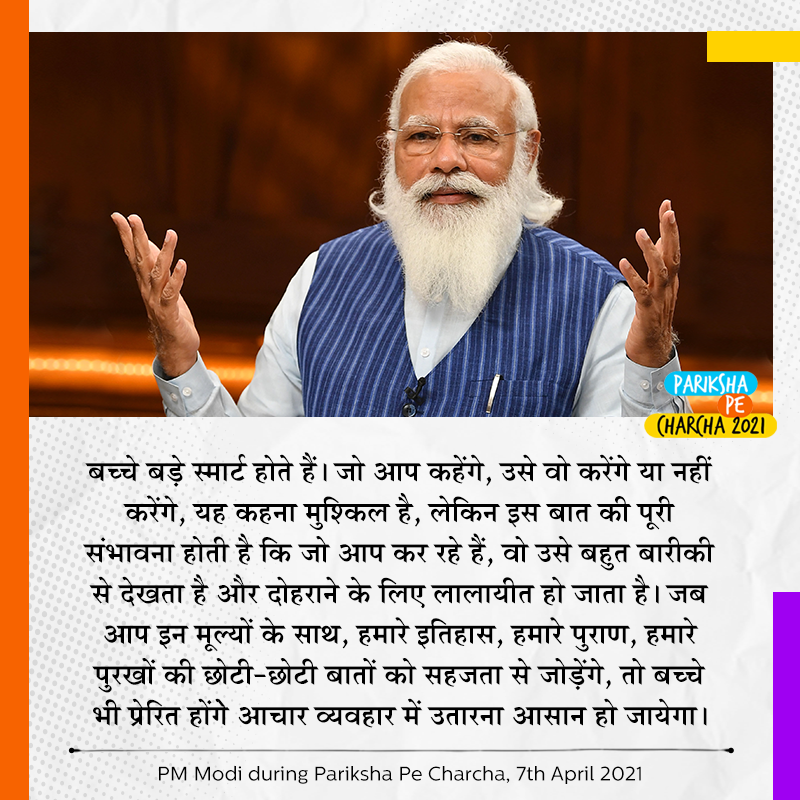 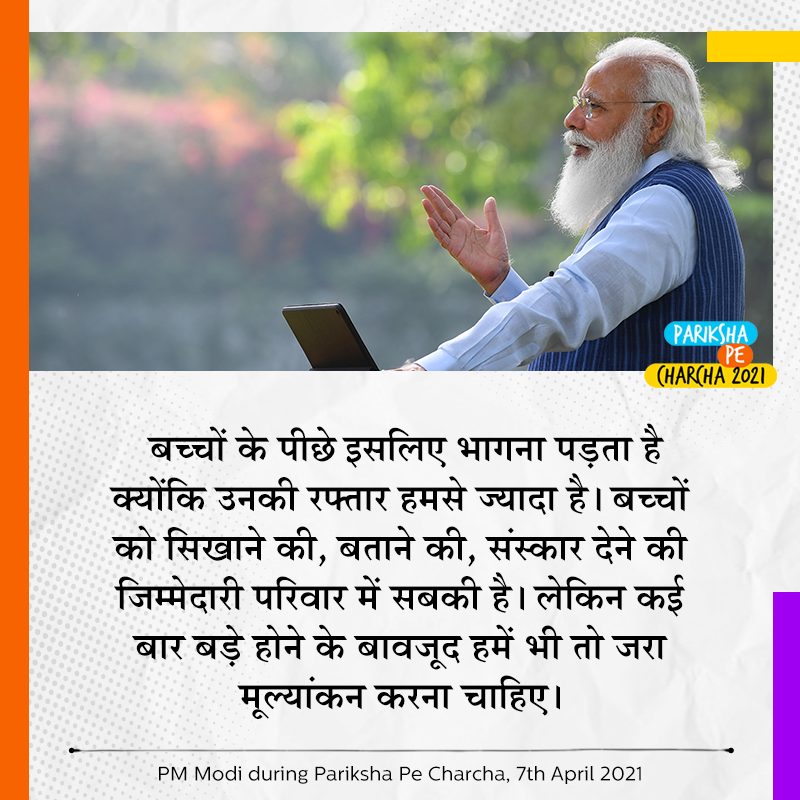 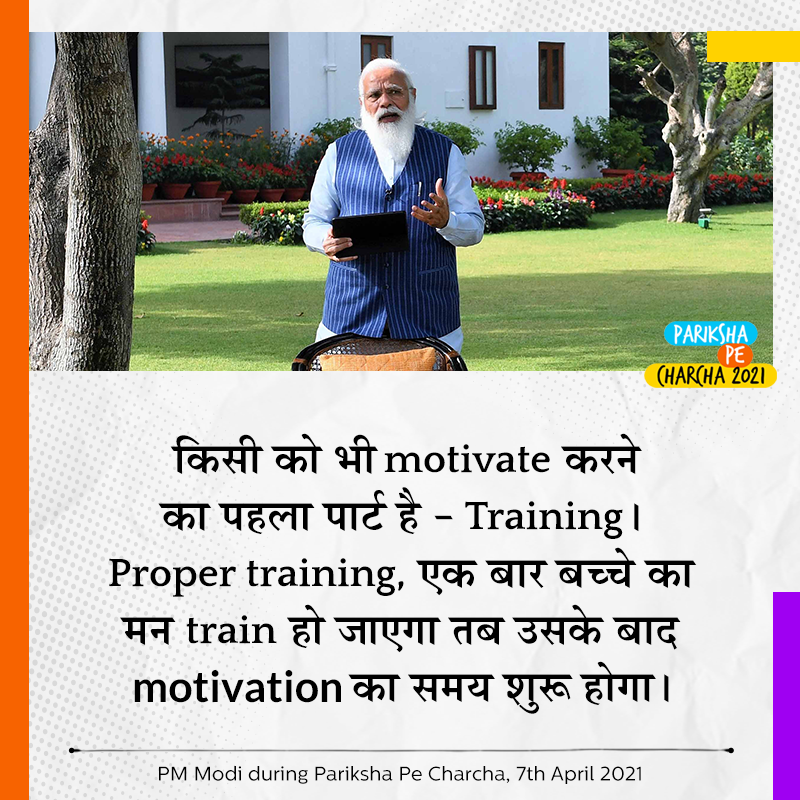 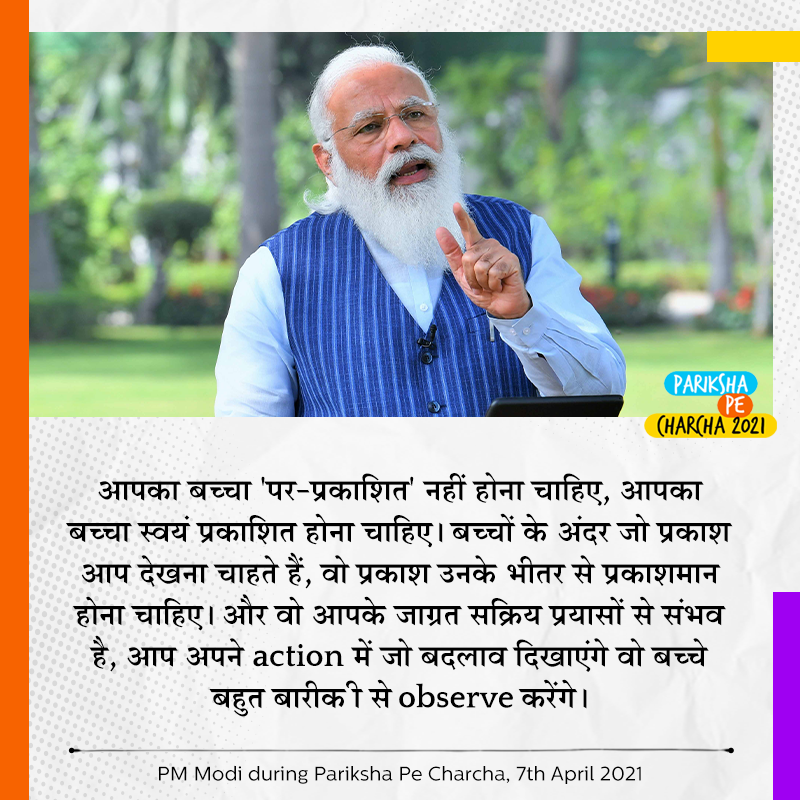 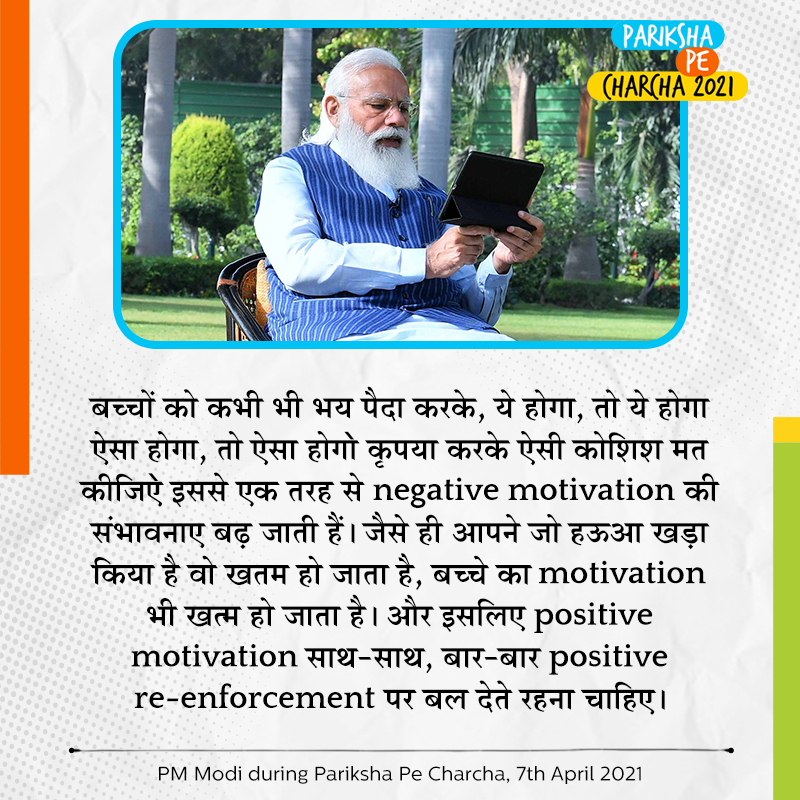 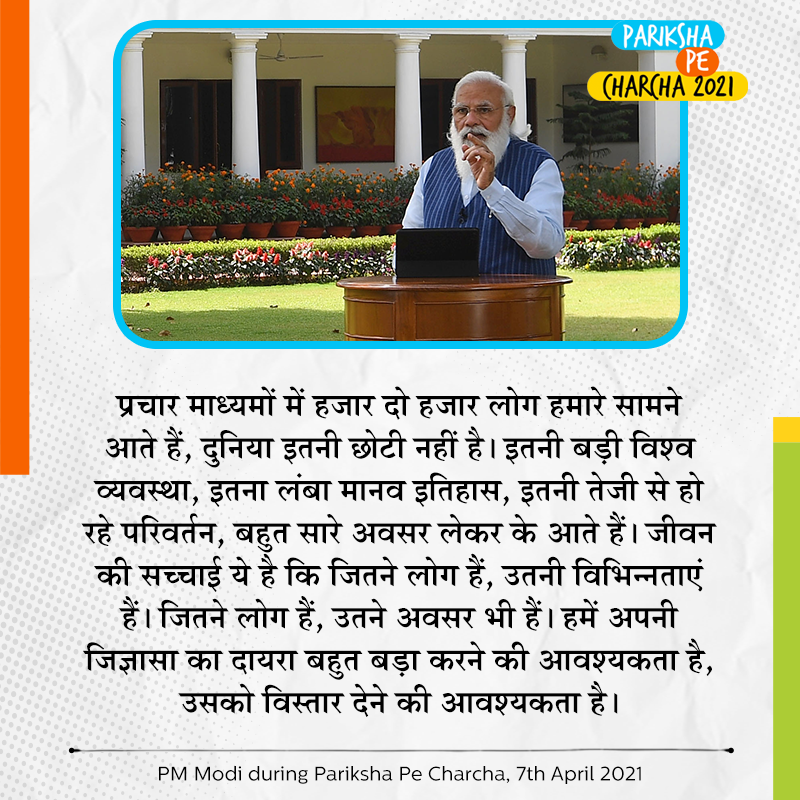 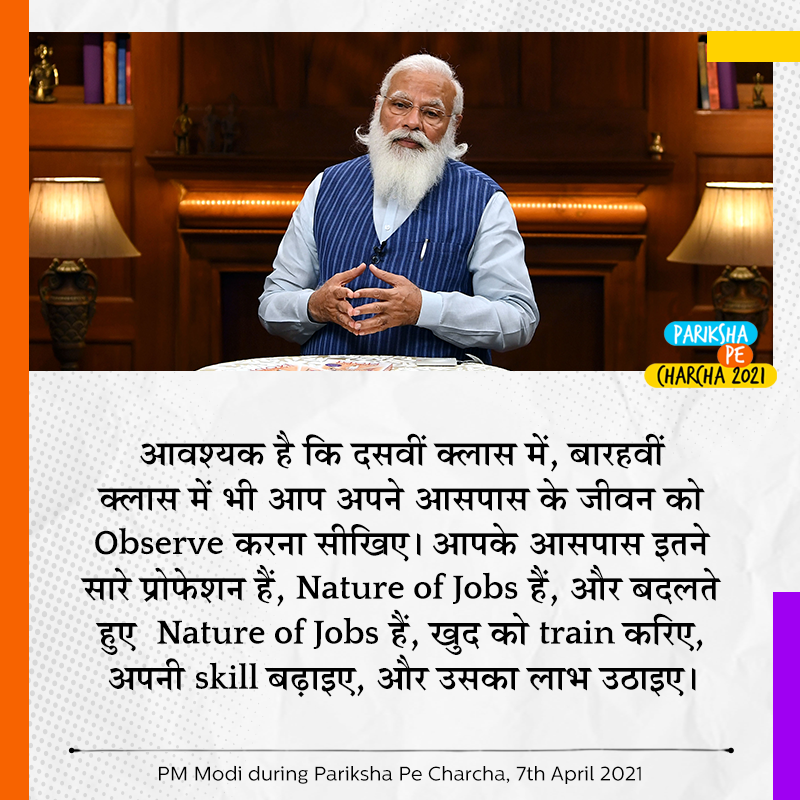 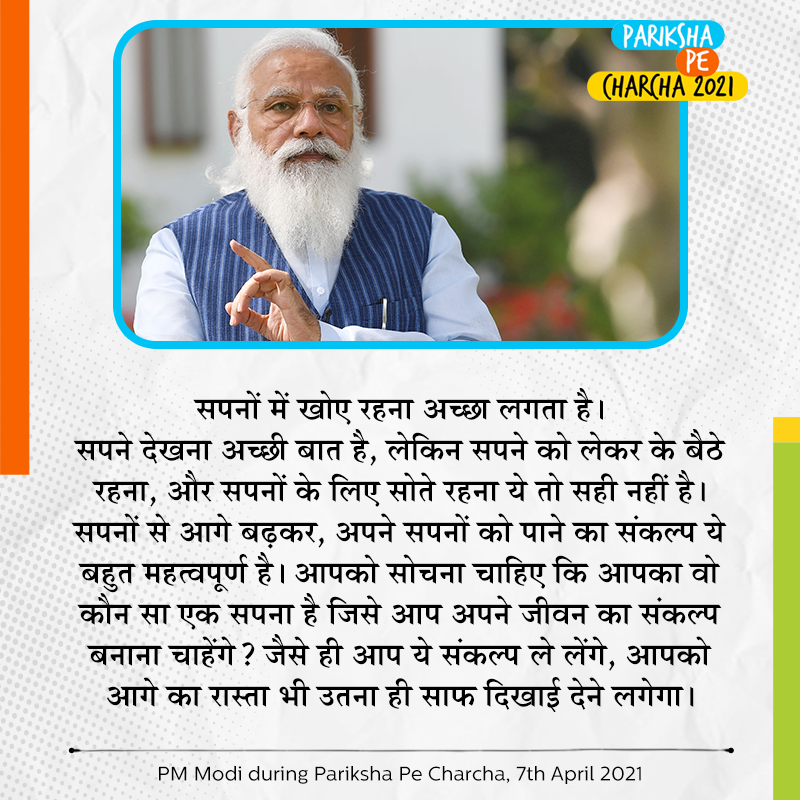 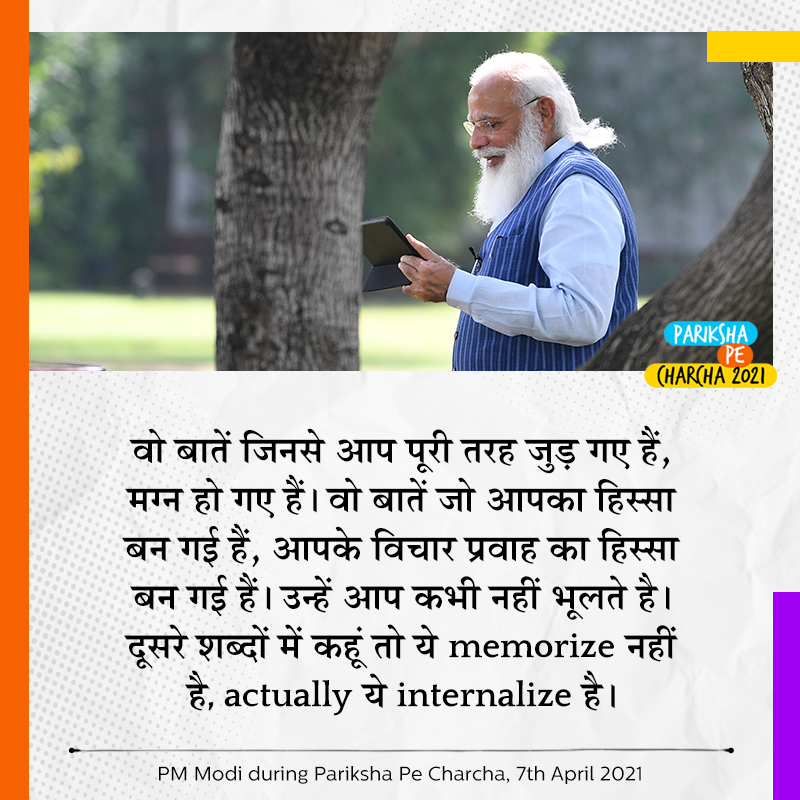 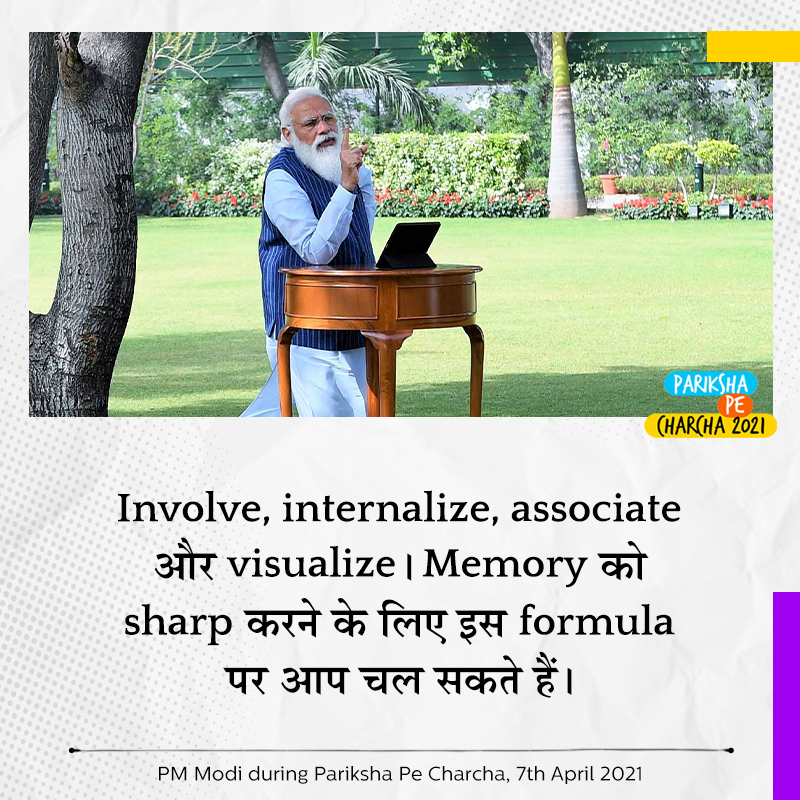 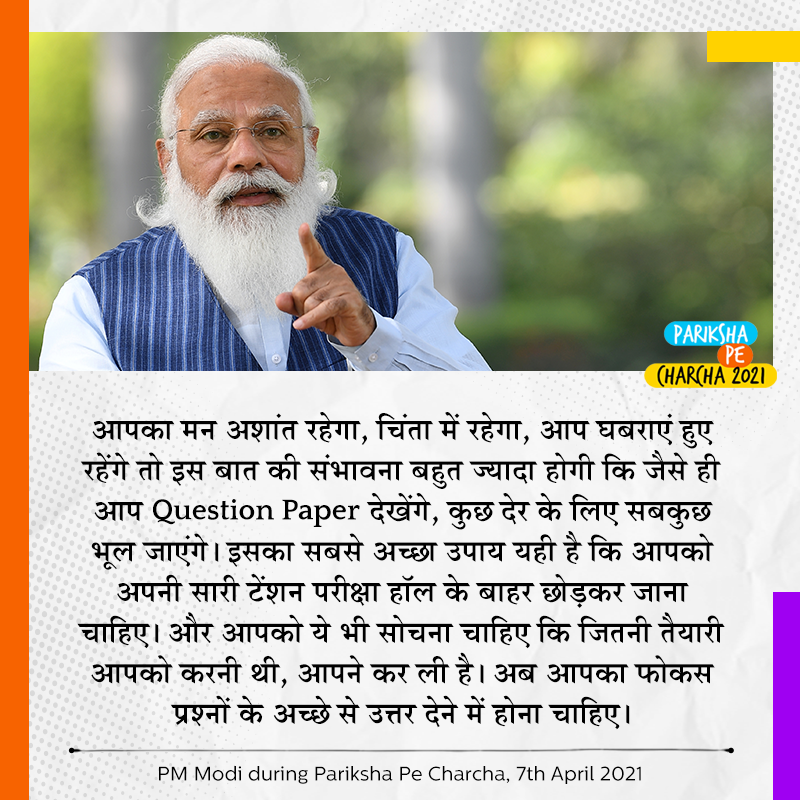 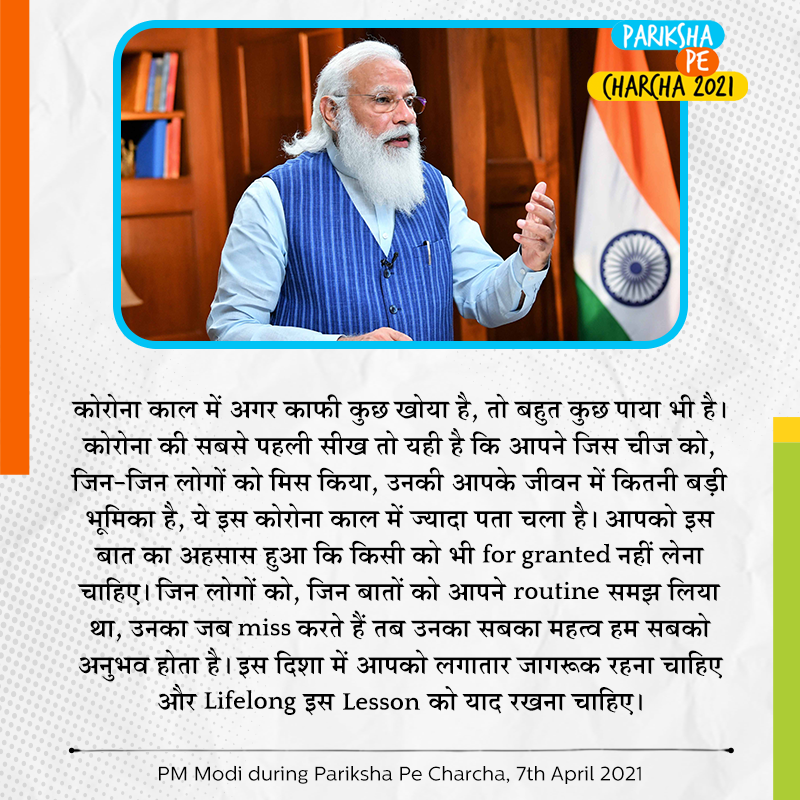 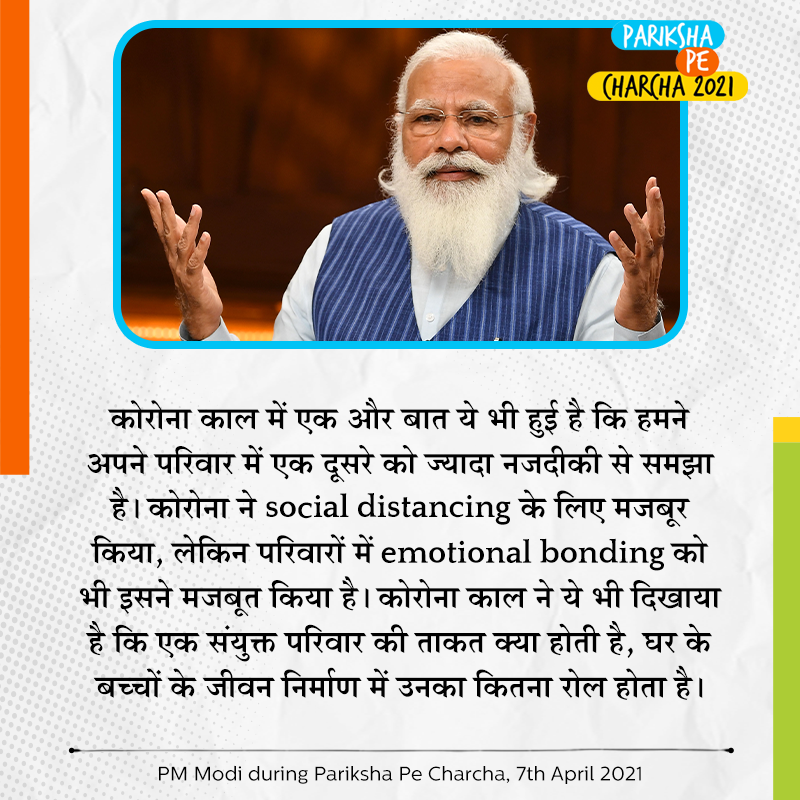 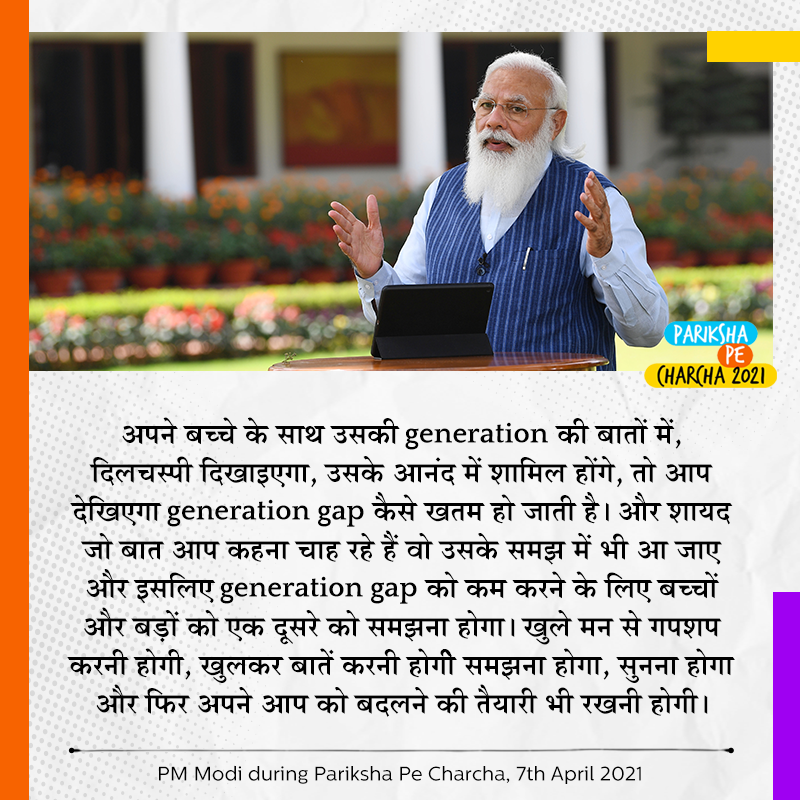 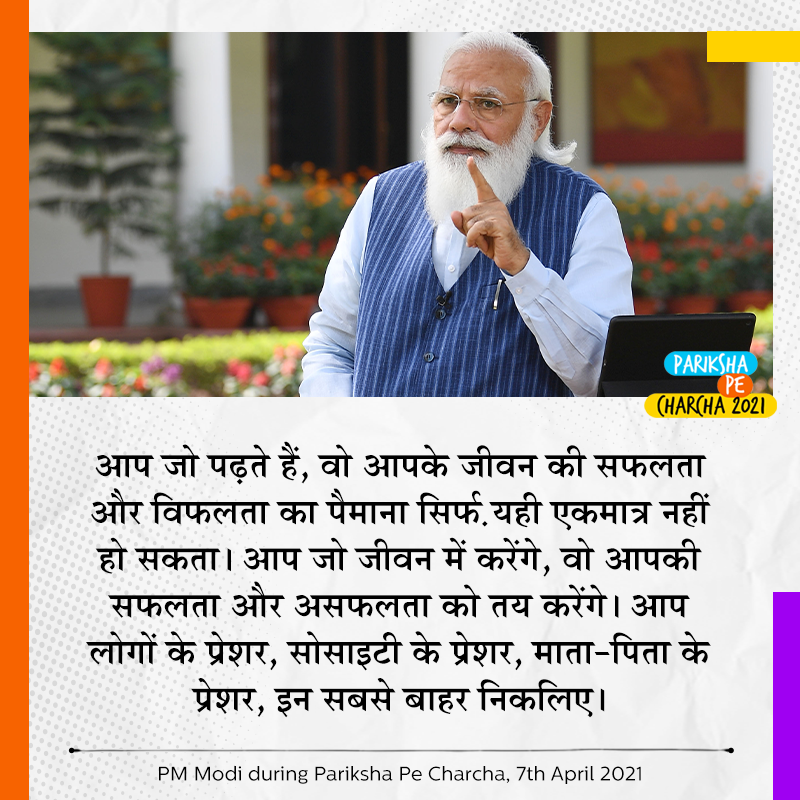 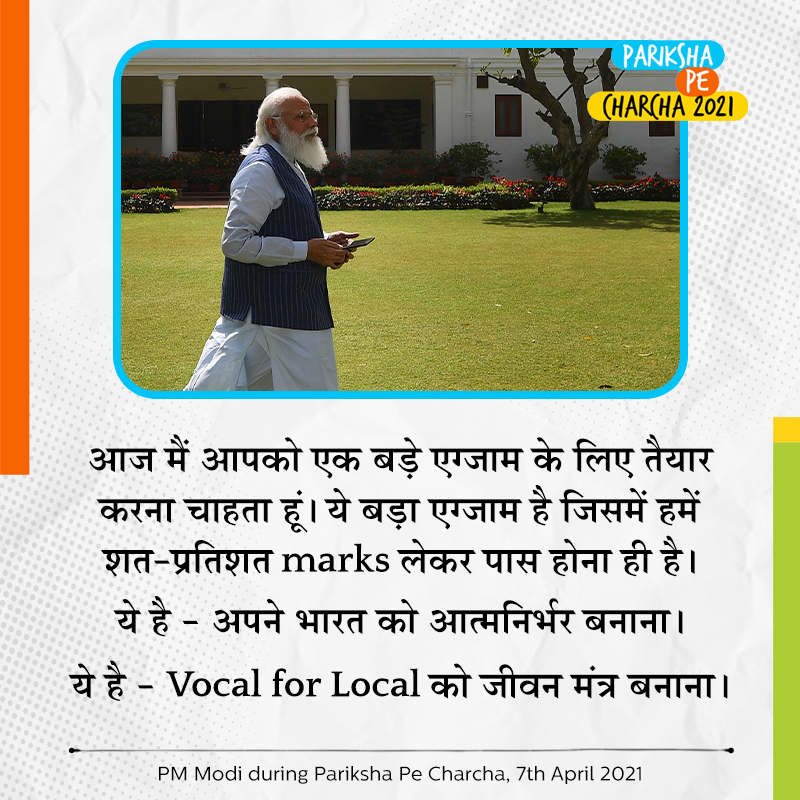 Terming this year’s interaction as first virtual edition of Pariksha Pe Charcha, the Prime Minister said that Corona has led to many innovations and despite the disappointment of not being able to be among the students face to face, there should not be a break in Pariksha Pe Charcha this year. He said that Pariksha Pe Charcha is not only a discussion on examination but also an occasion to talk, among family members and friends, in a relaxed atmosphere and create new confidence.

Students M Pallavi from Andhra Pradesh and Arpan Pandey from Kuala Lumpur asked the Prime Minister about how to reduce fear of examination. Shri Modi said that the fear is mainly due to the atmosphere that has made examination be all and end all of life, which makes students over conscious. The Prime Minister said that the life is very long and these are just a stage of life. He advised parents, teachers and peers not put pressure on students. He said exams should be treated as merely a good occasion to test oneself and should not be turned into a question of life and death. He said that parents who are involved with their children know their strength and weaknesses.

With regard to the difficult chapters and subjects, the Prime Minister advised to take every subject with same attitude and energy of the student should be divided equally among the students. The Prime Minister said his view on trying  easy questions first in the exams is slightly different. He said that the most difficult part should be addressed with ‘fresh mind’ and this will make easy ones feel even easier. He said in his work as the Prime Minister and Chief Minister earlier, he preferred to tackle difficult issues in the morning with fresh mind. He also said that it is not important to be master of all the subjects even those people are highly successful who have a firm grasp over one specific subject. He gave example of Lata Mangeshkar who has given her entire life to single minded pursuit of music. Finding a subject difficult is not a limitation and one should not run away from difficult subjects, The Prime Minister added.

The Prime Minister dwelled at length on the importance of free time. He said free time should be valued as without it life will be like a robot. One values free time more when it is earned. More importantly, cautioned the Prime Minister that we should be careful about avoiding things during the free time that have the danger of eating away all the time. These things will leave you exhausted instead of refreshed. Free time is the best opportunity to learn new skills. Free time should be used in the activities which bring out the uniqueness of an individual, he said.

The Prime Minister told teachers and Parents that children are very smart. They observe and follow the actions of their elders more than the verbal directions of the elders. Therefore, it is important that our world-view, preaching should be borne out by our behaviour. Elders should try to inspire by living their ideals.

The Prime Minister emphasized the need of positive reinforcement and cautioned against negative motivation by scaring the child. He also pointed out that with the active efforts of the elders, children find the light within as they observe the exemplary behaviour of the elders. He said “positive motivation augers well for growth and development of youngsters.” First Part of the motivation is training and a trained mind precedes motivation, he said.

Shri Modi advised the students that they should have resolution to achieve their dreams. They should not be disappointed by the glamour of celebrity culture.  He said that fast changing world brings many opportunities and there is a need to expand scope of curiosity to grasp those opportunities. He said that in class 10th and 12th, students should start observing the life around them for the nature of jobs and new changes and start training and skilling themselves for them.  He emphasized the need for zeroing in to a resolution which a student wants to make the key resolution of his or her life. Once that happens path will be clear, said Shri Modi.

The Prime Minister also explained the need for health food and called for recognizing the benefits and taste of traditional food.

On the issue of difficulty in remembering things, the Prime Minister gave the formula of ‘involve, internalize, associate and visualize’ as a pathway to sharp memory. He said things that are internalized and become part of the thought flow are never forgotten. One should internalize instead of memorize.

The Prime Minister asked the students to take exam with relaxed frame of mind. “All your tension must be left outside the examination hall”, said Shri Modi. He advised the student to focus on giving the answers in best possible way without getting tensed about the preparation and other worries.

On the pandemic, the Prime Minister said “Coronavirus forced social distancing, but it has also strengthened emotional bonding in families.” He said if we have lost a lot during the pandemic, we also have gained a lot in the form of appreciation of things and relationships in life. We realized the importance of not taking anything or anyone for granted. Corona period told us the value of family and its role in shaping the lives of children.

The Prime Minister said the if elders show interest in the issues of the child and his generation, the generation gap will evaporate. In order to communicate and understand each other, there is a need for openness between elders and children. Children should be approached with open mind and we must be willing to change after engaging with them.

The Prime Minister insisted that “what you study cannot be the only measure of success and failure in your life. Whatever you do in life, they will determine your success and failure.” Therefore, children should come out of the pressure of people, parents and society. 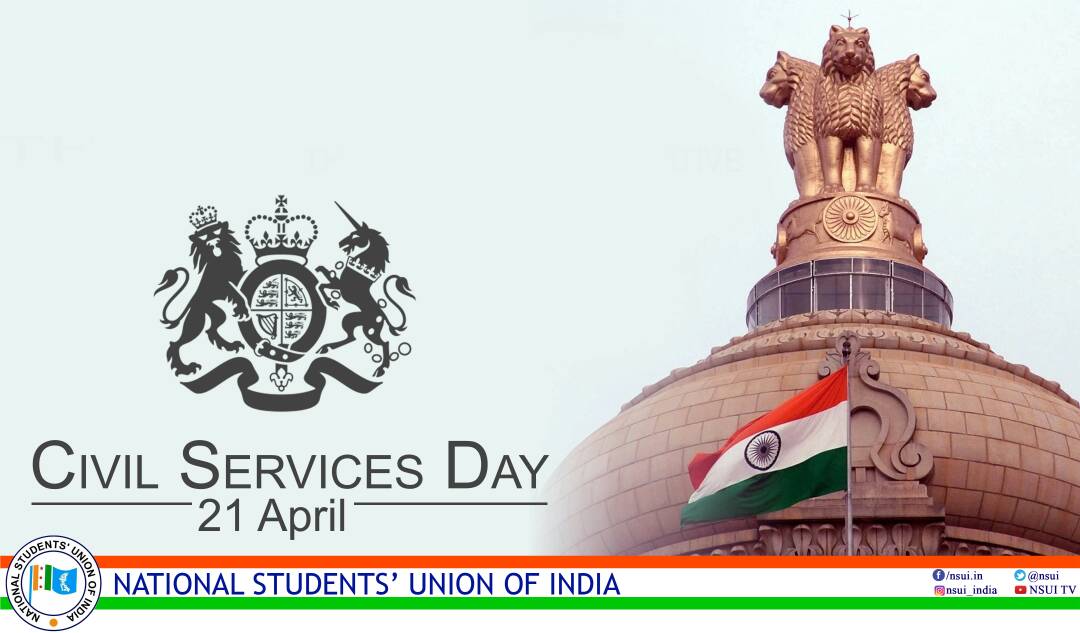 educratsweb provide the educational contents, Job, Online Practice set for students.
if you have any information regarding Job, Study Material or any other information related to career. you can Post your article on our website. Click here to Register & Share your contents.
For Advertisment email us at educratsweb@gmail.com
#Search | http://educratsweb.com/content.php?id=5629