In a pathbreaking initiative, the Minister for Social Justice & Empowerment Shri ThaawarchandGehlot virtually inaugurated 14 Cross-Disability Early Intervention Centres located at 7 National Institutes and 7 Composite Regional Centres under the DEPwDin New Delhi today. The Centres will provide screening and identification, rehabilitation, counselling, therapeutic services among others for different disabilities under one roof and in a contiguous manner.

Ministers of State for Social Justice and Empowerment, Shri Krishna Pal Gurjar, Shri Ramdas Athawale, and Shri Ratan Lal Kataria were also present on the occasion. Secretary, Department of Empowerment of Persons with Disabilities (Divyangjan), Ms. Anjali Bhawra;Joint Secretary, DEPwDMs. Tarika Roy; senior officers of DEPwD were among those who attended the function.

Addressing the program, Shri ThaawarchandGehlot said that Divyangjan have always been and will always be one of the topmost priorities of the Government led by Prime Minister Narendra Modi. The Central Government has implemented the Rights of Persons with Disabilities (RPWD) Act, 2016, in line with the United Nations Convention on the Rights of Persons with Disabilities, which envisages an inclusive society for persons with disabilities.

Minister Gehlot further said that there is a need to identify children with disabilities or infants who are at risk of developing a disability, and provide them early assistance, so as to ensure optimal development of the child. Keeping these things in mind, in the first phase, we have decided to set up 14 cross disability (Early Intervention) centers in our institutions. In 2022, we are also working towards setting up such centers in all CRCs. As a result of which the facility of Cross Disability-Early Intervention Centers will be available in about 25 States and Union Territories, the Minister explained. 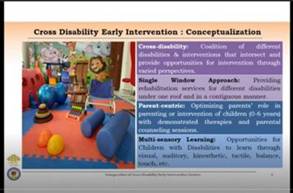 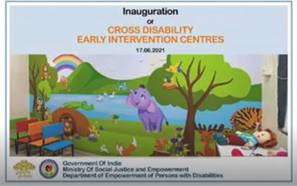 ''Our National Institute and the CRCs under them have been providing rehabilitation services to the differently-abled. But the national institutions have been working only for the specific disabilities. With this new initiative of ours, with the establishment of these cross disability Early Intervention Centers, identification of all types of disabilities and medical and rehabilitation services will be provided in our institutions under one roof'', he added.

Shri. Gehlot described that the Ministry has also prepared the Handbook of EIC, in which detailed information has been given regarding the structure and service profile of these centers and intervention strategies. We hope that it will be helpful in setting up the Cross Disability Early Intervention centersat other places.

''We would urge the state governments to create awareness generation  at the state level so that the facilities provided in these centers reach as many people as possible. We would also like to urge that they should establish such centers at their level by following our 14 Cross Disability Early Intervention Centers as a model'', Minister said.

The Handbook on Early Intervention Centres for Children with Disabilities was also released on the occasion. 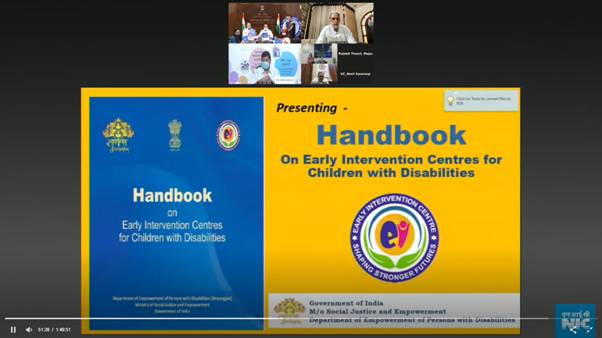 Speaking on the occasion, Shri Krishan Pal Gurjar said that one of the key aspects of meaningful integration of persons with disabilities is early detection and appropriate treatment. We feel that identification of at-risk cases, especially in rural areas, is an important aspect and it is also important to  provide necessary assistance and counselling to their parents in time. For this purpose, we are establishing Cross Disability Early Intervention Centers, Shri Gurjar explained.

On this occasion, Sh. Ramdas Athawale said this is an historic moment that the  Early Intervention centres have come up in the country for the first time. The objective of these centers is to make the differently-abled people virtually self-reliant in India and integrate them in the mainstream of society. He expressed confidence that this Cross Disability Early Intervention Centers will be successful in reducing disability among the  children of 0-6 years of age and  hoped that the Centres will set high standards in their services.

Giving further details, Shri Rattan Lal Kataria said that he was  happy to know that these cross disability Early Intervention Centers have been carefully designed with child friendly environment which will make these centers attractive and interesting for the children. This will help children to receive therapeutic services in a soothing environment. Apart from this, the accessibility features will also help the differently-abled children and their parents to easily access the facilities of these centres.

In his introductory remarks, Ms. Anjali Bhawra explained that Disability in children is a matter of serious concern. According to the 2011 Census, there are more than 20 lakh children with disabilities in the age group of 0-6 years, who belong to the categories of visually impaired, hearing impaired, locomotor disability etc. This means that around 7 percent of children in this age group suffer from some form of disability. These are expected to increase with the enactment of the Rights of Persons with Disabilities Act 2016, as there are now 21 categories in the disability category instead of 7. Researches show that the first 1000 days of a child's life are crucial to ensure healthy development, so it is very important to identify the risk cases at an early age so that the severity of the disability can be reduced through appropriate measures.

Joint Secretary, Ms. Tarika Roy made a detailed presentation on the features and benefits of these centres. Principal Secretaries/Secretaries dealing with empowerment of persons with disabilities of the concerned States/UTs as well as State Commissioners for PwDs from these States or their representatives attended the inaugural function. Directors of NIsand heads of CRCs also participated.

Research studies suggest that early childhood (0-6 years) is a time of remarkable brain development. It is the critical period that determines a person’s ability to reach her/his lifelong health, social and economic potential. Providing quality childhood intervention early in its life helps to develop the skills needed to enable to lead an independent and dignified life.

The Cross Disability Early Intervention Centres have been equipped to provide services and facilities in a contiguous manner in an accessible and aesthetically designed environment under one roof. These services include facilities for screening of children to identify risk cases and refer them for appropriate rehabilitative care. Provision for therapeutic services such as speech therapy, occupational therapy and physiotherapy have also been made in these centres. Parental counseling and training as well as peer counseling is an integral part of these centres with a view to enabling the parents to cope up with the needs of children with disabilities. School readiness facility at these centres aims at improving physical and cognitive ability including communication and language skills of the children with disabilities for enabling them to live an independent life.