Kayasthas practice family exogamy and caste endogamy preferring to marry only within their sub-castes. The individuals of same Al can not intermarry, while those of same caste and different Als can. Thus an individual from Srivastava subcaste and Pandey Al should not marry another Pandey of the same subcaste but can marry an individual belonging to another al of the same subcaste. Though not required, it is still widely practiced as a tradition.

Kayasthas worship ShreeChitraguptaji and on Bhai-Dooj, they celebrate Kalam-Dawaat Pooja (pen, ink-pot and sword worship), a ritual in which pens, papers and books are worshipped. This is the day when Shree Chitraguptji was created by Lord Bramha and Yamaraj got relieved of His duties and used this leave to visit His sister Devi Yamuna; hence the whole world celebrates Bhaiya dooj on this day and the Kayastha celebrate ShreeChitraguptajayanti, i.e. the ‘Birthday’ of their progenitor. 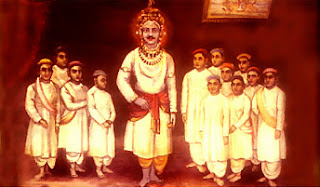 By worshipping Chitragupta who is their ancestor, kayasthas have the singular distinction of being the only “Ancestor-worshipping” sect of Hinduism.

Unlike most Baniya (Vaishya) or Brahmins, and like Kshatriyas, Kayasthas eat onions, garlic, meats like mutton and chicken, fish and eggs, though a large number are also vegetarians. Meat eating kayasthas do avoid beef as the cow is considered sacred for Hindus.

It is believed though not yet proved that Kayasthas of holy towns like Prayag, Mathura, Varanasi, etc. are purely vegetarians, while in other areas they may be mixed. It is said that Kayasthas started eating meat during the Muslim period when they socially mixed with the Muslims. It is also said that Kayasthas have the best eating sense, because amongst Hindus, Kayasthas add the largest varieties of food to their diet. Subscribe via Email (Powered by Google FeedBurner)
1. Kayastha Matrimony - The No. 1 Matrimony Site for Kayasthas
KayasthaMatrimony.com is part of CommunityMatrimony which has over 300+ Indian community portals offering online matrimonial services. Register for FREE to find a partner from your own community. Take advantage of our user friendly search features to find a bride or groom who matches your preferences. Join us and begin your happy journey today. View millions of profiles
2. Kayasthas as in the Puranas
According to the Vedic scriptures, the souls of men after death receive rewards and punishments according to their sins and virtues, and hence it is believed that good and bad deeds of men are not destroyed. The souls of men after death go to Yamapuri which is presided over by the deities called Yamas who keep records of men's actions and accordingly give them their dues. The principal Yama is called Yamaraja or Dharamaraja, that is, the ruler of Yamapuri or the King of Laws.
3. Kayastha culture
Kayasthas practice family exogamy and caste endogamy preferring to marry only within their sub-castes. The individuals of same Al can not intermarry, while those of same caste and different Als can. Thus an individual from Srivastava subcaste and Pandey Al should not marry another Pandey of the same subcaste but can marry an individual belonging to another al of the same subcaste. Though not required, it is still widely practiced as a tradition.  Worship Kay
4. KAYASTHA SURNAMES
The Kayastha Community in India is spread thin into various states. The easiest identification is the last (surname) name. However, over the period, many new names have evolved. We attempt, here, to provide an exhaustive list of surnames etc. being used by Kayasthas in various states (we’d like to put on record that the list appearing hereunder may have some missing family names. We will appreciate if the same is brought to the notice of this web-site so as to make the information appearing her
5. Chitragupta Ji Maharaj Father of Kayastha Family
Vedic Origin The Kayastha trace their genealogy from Adi Purush Shri Chitraguptaji Maharaj. It is said that after Lord Brahma had created the four Varnas (Brahmins, Kshatriyas, Vaishyas and Shudras), Yama snonym Dharamraj requested Lord Brahma to help him record the deeds, good and evil, of men, and administer justice. Lord Brahma went into meditation for 11000 years and when he opened his eyes he saw a man holding pen and ink-pot in his hands and a sword girdled to
6. Chitragupta Ji Maharaj Father of Kayastha Family ~ Wallpaper educratsweb provide the educational contents, Job, Online Practice set for students.
if you have any information regarding Job, Study Material or any other information related to career. you can Post your article on our website. Click here to Register & Share your contents.
For Advertisment email us at educratsweb@gmail.com
#Search | http://educratsweb.com/content.php?id=762